Los Bukis Events Near You 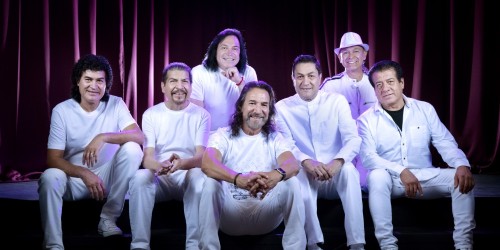 Los Bukis (The Bukis, buki translates as Little Kid in Yaqui language) are a Mexican Grupera band from Ario de Rosales, Michoacan. In 1975 the band was founded by cousins Marco Antonio Solís and Joel Solís. Their first song was Falso Amor ("False Love") and its style became popular in all of Latin America. Marco Antonio wrote the songs; the album "Me Volvi a Acordar de Ti" in the year of 1987 sold one million records in just a few weeks after its launch earning the album "diamond" status. He also wrote and produced albums for artists such as Marisela, Rocío Dúrcal, Beatriz Adriana, Lucero, El Pegasso de Emilio Reyna (now using the name El Pega Pega) and María Sorté.

After twenty years of success, in 1996, Marco decided to pursue a solo career. The band disbanded. An agreement was made with the remaining band members, both parties agreed to not make any use of the word "buki". The remaining members formed a new band called Los Mismos ("The Same Ones") as in "the same members of Los Bukis".